What Automotive Marketing Can Teach Us 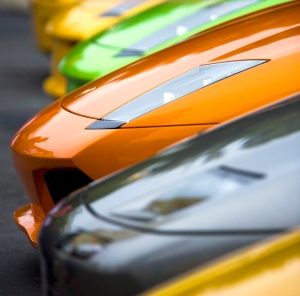 What can other industries learn from automakers? The car industry is a key barometer used to measure U.S. economic growth, and when times are tough, automotive marketing is not for the faint of heart.

In this fiercely competitive and highly funded category, marketers spend big bucks to attract some of the best creative talent, data intelligence and marketing minds in the business. In high stakes marketing, expensive mistakes lead to complex strategies and techniques that could just as easily be applied to retail establishments, entertainment, food and packaged goods.

Auto brands are challenged with winning consumer loyalty in an increasingly crowded market. Consumers that have over 400 new models to choose from can easily become overwhelmed. Add to that the high cost of operating a car, including insurance, fuel and maintenance. Also, the parent car company has limited control over the retail experience. All in all, it’s a pretty solid marketing challenge.

In the midst of the new car launch season, we took a peek into some of the more interesting executions going on this year to glean some sage advice from car companies. 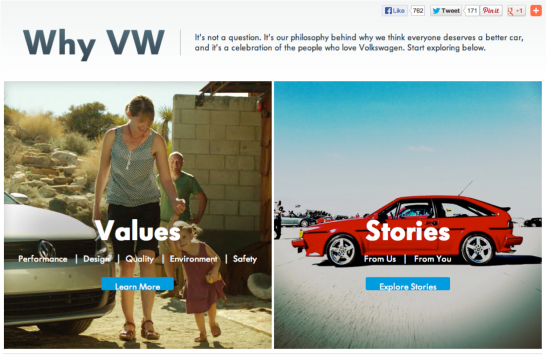 Volkswagen – Let the customer take over the message.

As a brand on its way up with a goal to reach 800,000 unit sales in the US by 2018, VW is currently selling 438,133 cars YTD. Compare this to Chevrolet’s 1.2 million in 2012, and you can see VW has a long way to go. To get into the fray, they are cleverly using their own form of Americana messaging with testimonials from their American fan base to populate a new campaign. The digital execution called, Why VW, presents Volkswagen content side-by-side with select stories submitted by consumers on one integrated platform and the VW Facebook page. The company’s marketing chief, Kevin Mayer, explains how it came to be, “It comes from the insight that social is part and parcel of the American lifestyle. Our customers love to post and talk about their passion for the Volkswagen brand.”

Chrysler, the smallest of the “Detroit Three” has come up with an ingenious strategy to stretch its limited marketing budget, which is currently 40% less than GM and 20% less than Ford. In a barter deal with Paramount Pictures, a simply staged commercial series for the Dodge Durango features Will Ferrell playing the role of Ron Burgundy in the Anchorman 2 film. The end slate on the spot is a standard promotion for the movie. With its heritage of featuring big names like Eminem and Clint Eastwood in 2-minute Super Bowl spots, Chrysler has “kept it classy” without spending a huge amount of money.

Ford – Be edgy when traditional approaches can’t break through.

Marketing Chief, Jim Farley (if that name’s familiar, it’s because he’s the cousin of the late, great SNL comedian, Chris Farley) has his eye on getting Ford products in front of the next generation of car buyers. Earlier this year, to create attention for the new Ford Fusion, a digital campaign called “Random Acts of Fusion” flew in the face of the typically machismo car marketing approach. The campaign successfully sought to thank the Twitter followers who said nice things about the newly redesigned Fusion and challenge the naysayers. With the hashtag of #backatyou, prizes and street cred were promised to get momentum going. The resulting 33 digital videos, a few which featured edgy comedian, Reggie Watts, attracted more than 11 million views and 200,000 new Ford Facebook fans.

GM’s recent partnership with popular artist, John Legend corresponded nicely with the launch of the 2014 Chevrolet Impala – a car that received the highest sedan ratings from Consumer Reports. Legend’s new single, “Made to Love,” a tune tied directly to an album release this month. Korean brand, Hyundai has used music in very unique executions, with a taste for lesser-known, but very cool talent. In last year’s Super Bowl ad, The Flaming Lips performed an original song written for the commercial called, ‘Sun Blows Up Today,’ while a family goes on a radical playdate. This year, Hyundai features a remix of Bob Marley’s ‘Three Little Birds,’ to tout Hyundai’s Assurance Connected Care safety program. With Bob’s remixed voice assuring folks that “every little thing’s gonna be alright,” how can you worry?

8 comments on “What Automotive Marketing Can Teach Us”