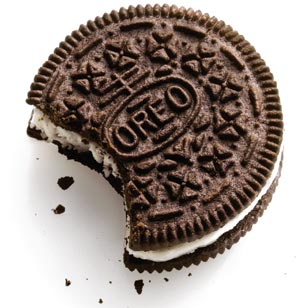 — The Oreo cookie took the cake again. The brand experienced one of the greatest jumps in measured consumer interest from 2011 to 2012, going from the #494 to #198 per NBCUniversal’s Integrated Media’s Brand Power Index. That announcement came mere days after the guerrilla marketing efforts for the Super Bowl Blackout Tweeted Around the World. A strategic integrated marketing campaign over the past year tied to Comic-Con, Gay Pride Month and the Summer Olympics fueled the extraordinary growth in consumer interest.

— Marketing darling Red Bull also received a shout out in the BPI, particularly for its sponsorship of Austrian daredevil Felix Baumgartner’s world record-setting sky fall from space last year, as did Burger King, which was celebrated despite its recent Twitter hack for tapping celebs ranging from athlete David Beckham to funnyman Jay Leno to starlet Sofia Vergara to pitch a new line of healthier menu options. The only brand more notable: Starbucks, which used 2012 to introduce mobile payment options to some 7,000 stores. My Vertical Marketing Network colleagues and I know the future has already arrived, yet one question remains: are sponsorships still a worthy marketing investment?

— For smaller brands, the greater question doesn’t concern pricy endorsements, but rather risky promotions. The New York Times recently reported an intriguing business column about a Baltimore furniture company, Gardiners, which promised to give away items bought in the days leading up to the Super Bowl if their hometown team returned a kickoff for a touchdown, which is exactly what the Ravens did. In total, the family business gave away more than $600,000 in goods, most of which was covered by a smartly purchased insurance policy. Even better: their unofficial Super Bowl ad took up only 5% of their annual marketing budget. Find out how they made news and perhaps trigger some inspiration here.

— Speaking of inspiration, by now, you’ve probably seen the Google Glass video making waves on Facebook and Twitter. In case you haven’t, you’ve got to see this:

Last week, AdWeek reported that experts are already predicting the technology will upend the entertainment, gaming and marketing industries, and quoted one industry guru as saying consumers haven’t seen such a massive leap for mankind since the advent of the iPhone. Glass won’t hit shelves until 2014, but marketers rest assured: the gauntlet has been thrown, and we’ll be seeing promises of more Jetson-like technology appearing soon on an Internet near you.

— Until then, we still have old technology to keep us talking… Lays made waves earlier this month when its much-hyped consumers-choose-the-next-chip-flavor contest was spoiled by traditional news media, which managed to scoop the brand’s own Facebook page and release the names of finalists, to the chagrin of its nearly 6 million fans. The new flavors will hit shelves for a limited time, and the brand says the final winner – again chosen by consumers — will be announced in May. Hopefully when that time comes, Lays will take this social snafu to heart.

Did we miss one of your top stories? Tell us in the comment section below, or head over to the Vertical Marketing Network Facebook page to join the conversation.