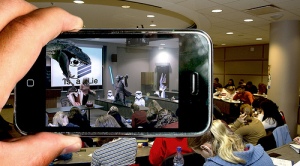 The line between reality and illusion is getting thinner. Augmented Reality mobile apps use built-in smartphone features such as cameras, compasses and GPS to build virtual worlds -- entertaining and helpful -- atop real ones.

It was Albert Einstein who famously observed that “reality is merely an illusion, albeit a very persistent one.” Imagine what he would’ve thought of Augmented Reality. Just how common is Augmented Reality (AR)? Think about football broadcasts where the yellow first-down marker is seen on every play? Or, consider Olympic broadcasts where the current position of the race leader is projected on the challenger, from swimming races to downhill skiing. Apply AR to the world of smartphones and mobile apps and you have a dimensional revolution. With Gartner estimating that U.S. sales of smartphones will increase from 67 million in 2010 to 95 million by year’s end (making it the highest-selling consumer electronic device category), and Nielsen reporting that more than half of U.S. adult consumers will be smartphone savvy by December, the modern marketplace would seem — to Einstein, anyway — almost a delusion. But marketers know better. Reality has never held so much potential for illusion. Take, for example, AR mobile apps. While AR is far from new — brands ranging from BMW and Toyota to Doritos and Wrigley have been using AR for years to engage consumers online — the implementation of AR technology in mobile apps is only now causing electronic waves. With smartphone sales rising, consumers are no longer confined to their home computers and webcams. Using smartphones and built-in technologies such as compasses, GPS and gyroscopes, consumers can use mobile apps to create virtual worlds atop the real one. It’s no wonder ABI Research is expecting the market for AR to top  $350 million by 2014. The illusion is very real, indeed, and for marketers, the possibilities are as exciting as they are endless.

Maybe I’m just blogging out loud, but it seems AR technology creates an inspiring picture of the present and future. Marketers should Applaud and Respond to the changes AR creates in products, consumer expectations and marketing itself.

Used correctly, AR technology can offer entertainment, engage a wider audience and amplify the kind of consumer experience a brand hopes to impart. One of the first mobile apps to successfully implement AR was ARSoccer, which helps consumers to better their ball skills by aiming their smartphone camera to the floor, where the app then projects a soccer ball onto the smartphone screen to be kicked around and then some. Since then, AR technology has expanded to include mobile apps such as AR: Augmented Car Finder, which does exactly what it claims to do, Metro AR Pro, which identifies subway and metro stations in major cities, and Wikitude, which allows users to explore their surroundings by producing — again via the smartphone camera — icons and Wikipedia articles for nearby places of interest. And now that Apple is in on the mapping game, these features are sure to increase. But AR technology doesn’t stop at games and geography. Real Estate agents in 25 major U.S. markets can benefit from mobile apps such as ZipReality Real Estate, and businesses ranging from big to small are being discovered with the Yelp app’s AR features. Last year, in an effort to appeal to the twentysomething demographic, Kia Motors created an AR game for its Facebook fans. And retailers such as H&M and J.C. Penny have used AR tricks such as virtual mirrors to engage consumers with “illusions of grandeur.”

After all, isn’t our modern-day reality just that: grand and vast and not an illusion, but a glimpse of future potential?